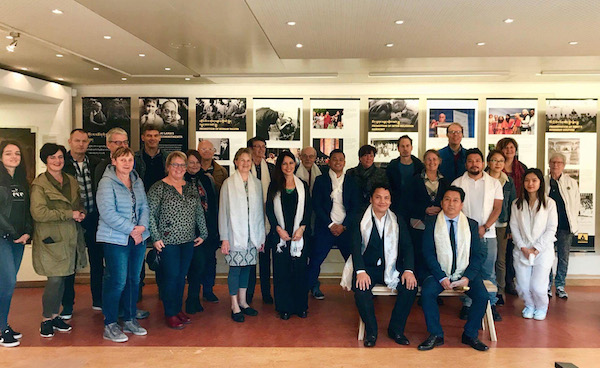 Group photo with the staff and contemporary Tibetan artist Tashi Norbu after the inaugural ceremony.

Emmen: The Tibet Museum of the Department of Information and International Relations, Central Tibetan Administration, with kind initiative by Tibetan contemporary artist Tashi Norbu, hosted a permanent exhibition on His Holiness the great 14th Dalai Lama’s three commitments in life at the Museum of Contemporary Tibetan Art, in Emmen, a town in North-eastern Netherlands.

The exhibition, which was opened to public on October 22, 2017, is an attempt by the Tibet Museum to spread His Holiness the Dalai Lama’s messages of love, peace, compassion and non-violence across the world. The exhibition with photos and textual description in Tibetan and English covers His Holiness’ three main commitments in life – the promotion of human values, promotion of inter-religious harmony and the preservation of Tibet’s Buddhist culture and Tibet’s natural environment both of which are under threat of destruction under Chinese occupation. The exhibition will be permanently showcased at the Museum of Contemporary Tibetan Art, Emmen.

During the inauguration, Tashi Phuntsok, Director of the Tibet Museum, gave a brief presentation about the exhibition as well as about the Tibet Museum’s programmes and upcoming new Tibet Museum project. In his opening remarks, Phuntsok spoke on His Holiness’ life, his contribution towards humanity in general and the welfare of Tibetan people in particular, his messages of peace, love, compassion and universal responsibility.

The exhibition event was profiled in the State Newspaper, Dagblad van het Noorden North Holland and local radio station, ZuidOost 34. Both Tashi Phuntsok and Tashi Norbu were interviewed by the BBC reporter Bryan Lipzin on Tibetan art and culture as well as on Tibet’s political situations for a documentary film.

The Museum of Contemporary Tibetan Art was established by the contemporary Tibetan artist Tashi Norbu in collaboration with Dutch national Marjanne Tholen and was opened for public from June 1, 2017 onwards. The museum was established with an aim to enhance and cherish the Tibetan contemporary art rooted in Tibet, as well as to reflect the adjustment of Tibetan art and culture in the west and send messages of spiritual awareness across the globe. 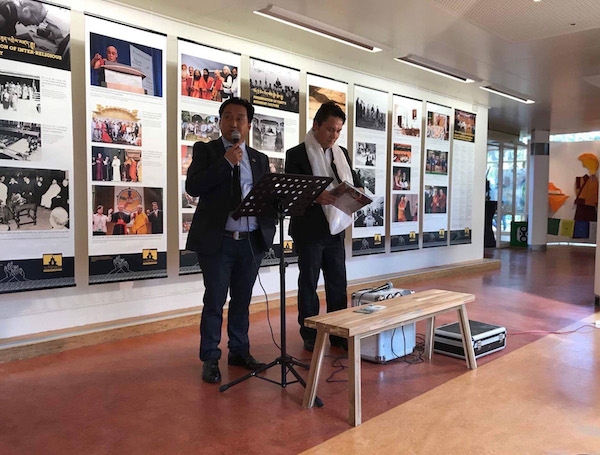 Director Tashi Phuntsok of The Tibet Museum delivering the opening remarks at the Museum of Contemporary Tibetan Art, in Emmen, a town in North-eastern Netherlands.

The event was profiled in state newspaper.