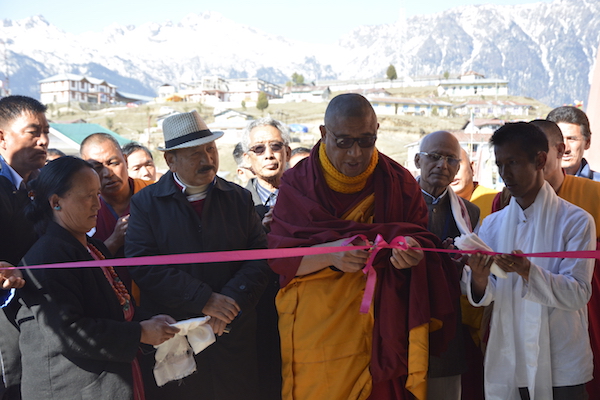 Gangkar Tulku, abbot of Tawang monastery along with Shri R K Khrimey, inaugurating the exhibition by The Tibet Museum at Tawang, Arunachal Pradesh.

TAWANG: To commemorate the 60th year of His Holiness the Dalai Lama’s arrival in India, the Tibet Museum of the Department of Information and International Relations, Central Tibetan Administration, showcased its photo exhibition titled “From Home to Exile” in Tawang on 20 March 2018.

The exhibition was inaugurated by Tawang Monastery abbot Gangkar Tulku accompanied by Shri R K Khrimey, National Convener of the Core Group for Tibetan Cause along with other dignitaries. The exhibition is being held in line with “Padyatra” from Chuthangmo (Indo-Tibet Border) to Tezpur (Assam) commemorating 60 years of His Holiness the 14th Dalai Lama of Tibet’s arrival in India.

The exhibition was welcomed warmly by the local public who thronged the exhibition and expressed that it is a matter of pride and honour for them that their people got the opportunity to serve His Holiness the 14th Dalai Lama and the fact that His Holiness visited Monyul – the land of Monpas several times.

After Tawang, the exhibition will be held at Dirang on 23 March, Bomdila on 24 March and Tezpur on 27 March.

Dignitaries going through the exhibition. Local public at the exhibition by The Tibet Museum at Tawang.