The Tibet Museum Showcases an Exhibition at Dekyiling Tibetan Settlement 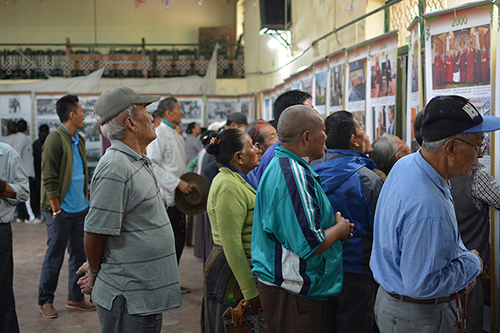 Elder people in Dekyiling Tibetans Settlement refreshing their past memories

Dehradun: As a part of the “2014 – Year of His Holiness the Dalai Lama” programme, the Tibet Museum of the Department of Information and International Relations, Central Tibetan Administration, organized an exhibition at Dekyiling Tibetan Settlement, on October 15th and 16th, 2014.

Mr. Jampa Phuntsok, Settlement Officer, inaugurated the exhibition and gave a brief introduction about the Tibet Museum’s month long programme in and around Dehradun. He mentioned that the exhibition was a good opportunity to learn about and pay homage to our ancestors’ hardships and to H.H. the Dalai Lama’s greatness.

Mr. Tashi Phuntsok, Director of Tibet Museum, presented His Holiness the Dalai Lama’s major contributions for Tibet and the Tibetan people, including the establishment of settlements and schools, as well as the democratization of the Tibetan community-in-exile. Mr. Phuntsok also gave a brief introduction on the three exhibition titles: His Holiness the Dalai Lama’s Main Three Commitments in Life, Tibet’s Journey into Exile and The Burning Question: Why are Tibetans turning into Self Immolation.

More than 700 people, including students from Sambhota school, Touchwood School and Noenga School, nuns from Sakya Nunnery, former CTA officials and laypeople from Dekyiling Tibetan Settlement came in large numbers to visit the two-day exhibition. The exhibition was followed by a documentary movie screening, in the evening. The visitors were very appreciative and touched by the exhibition. They requested that such exhibition programmes be frequently organized, in order to remind and inform younger generation about Tibet’s history, culture and struggle. 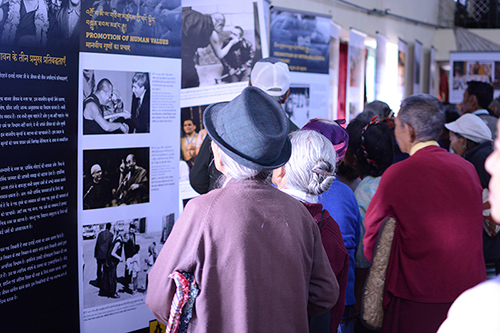 Remembering their hardship and struggle through photographs